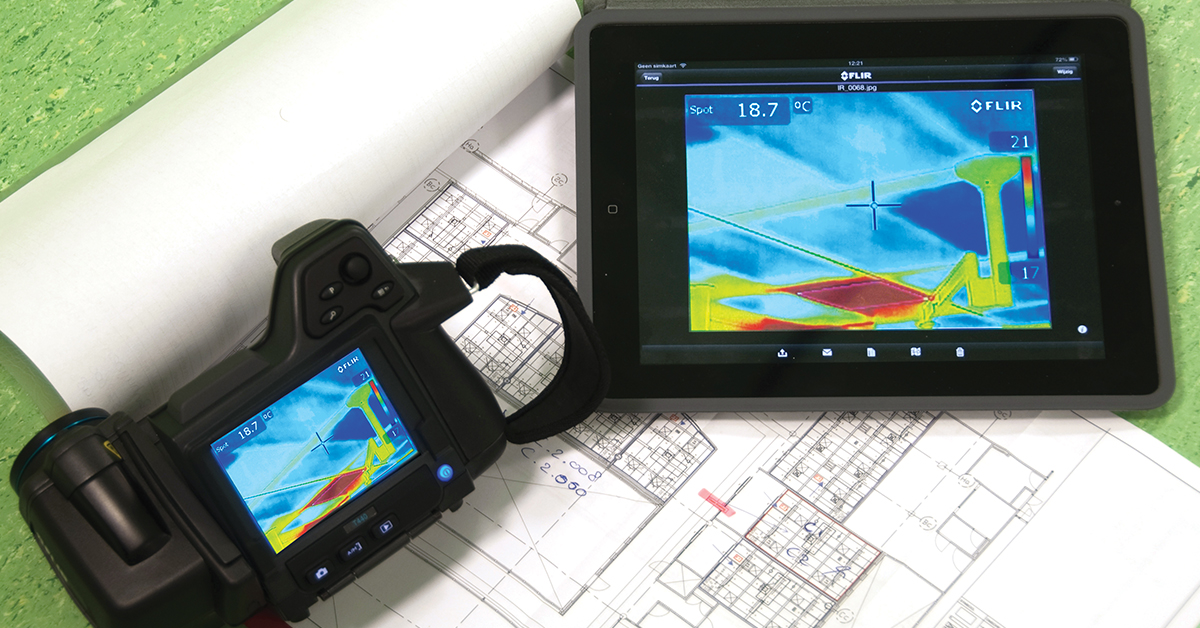 Many companies and offices develop new and contemporary working styles characterised by flexibility and efficiency. For this, the quality of the interior climate is of great importance. Architects are responding to this with ceilings that can be quickly adapted. Climate control ceilings offer unparalleled freedom of choice in this and surprising application possibilities in style, appearance, size, function and performance.

Climate control ceilings are also eminently suitable for integration in operating theatres and intensive care units in hospitals, where regulating the interior climate is very important. Recently, Inteco B.V., a specialist in the design and implementation of climate control ceilings and ceiling induction units for utility construction, installed approx. 1200 m2 of climate ceilings in a new buildingsoon to be commissioned for Bernhoven Hospital in Uden, the Netherlands. To be certain that the climate control ceilings work correctly and have been properly installed, the client of Inteco B.V. contracted Thermografisch & Adviesbureau Uden to inspect the installations as an independent party.

The climate control ceiling installed in Bernhoven Hospital is the MeandRo system developed by Inteco. The MeandRo system is a radiant ceiling for cooling and heating, using the passage of both hot and cold water and consists of perforated sheet steel ceiling panels in a sandwich construction, factory-equipped with a MeandRo element. This element is comprised of meandering 8 x 0.5 mm copper tubing soldered across its entire length to a heat conductor with a very open structure and the inner dimensions of the panel and it is applicable in any aesthetic design. The MeandRo elements are attached to each other using quick links, and that is precisely where errors can occur during installation. However, an expert, post-delivery inspection allows for rapid, simple correction of these errors.

Inspection with a thermal imaging camera

If the climate control ceiling elements are not properly connected, the desired interior climate cannot be achieved. Another problem that can arise during installation is insufficient supply of hot or cold water, causing improper functioning of the ceiling. To prevent problems with the system after commissioning, these imperfections can be detected quickly

For this inspection, Bas Coolen, of Thermografisch & Adviesbureau Uden, uses a FLIR T440bx thermal imaging camera. “The thermal images show clearly whether a system has been installed properly”, Coolen explains. "Temperature differences in the ceiling can be seen quickly with a thermal imaging camera and, with the new MSX function (Multi Spectral Dynamic Imaging) on the FLIR T440bx, it's easy to orient yourself and to see exactly which elements you are inspecting".

Thermografisch & Adviesbureau Uden, active for more than 16 years in the area of inspections using thermal imaging technology, has seen the developments in thermal imaging cameras in close-up. "We still use the FLIR thermal imaging cameras from a few years back, but we're really pleased with the improved models with innovative functions", says Ralf Grispen, Thermografisch & Adviesbureau Uden's commercial manager. “For example, the FLIR T440bx's compatibility with smartphones and tablet PCs makes it really easy to immediately show or share the thermal images made during an inspection with a client or installer. With the FLIR T440bx's 320 x 240 pixel image quality, temperature differences can be seen clearly”.

The extremely ergonomic FLIR T440bx thermal imaging camera was developed for users who demand high performance at an affordable price. The FLIR T400bx series combines perfect ergonomics with high-quality images at 320 x 240 pixels. De FLIR T400bx series is equipped with a tiltable optical unit that allows for picture-taking from every desired angle with a comfortable work posture. For the building trades in particular, the FLIR T440bx has a built-in compass. So the inspector can note the direction he's viewing and the direction to which a wall is oriented. This can be important when conducting building inspections. The camera's direction of view is added automatically to each image.

Interesting objects - both in the thermal image and the visual image - can be marked by sketching directly on the FLIR T440bx touch-screen. With the FLIR T440bx, a ‘direct report’ of the inspection (including markings or comments) can be drawn up. A programmable button provides access to favourite functions.

“Thermal imaging technology has already proven itself in many different applications”, said Coolen. "The use of thermal imaging cameras for climate control ceiling inspections ensures that any problems are identified quickly and clearly and that they're also quickly resolved. This keeps problems from occurring at the hospital after commissioning that can delay or even stop hospital activities, and that can result in unforeseen and unwanted costs".