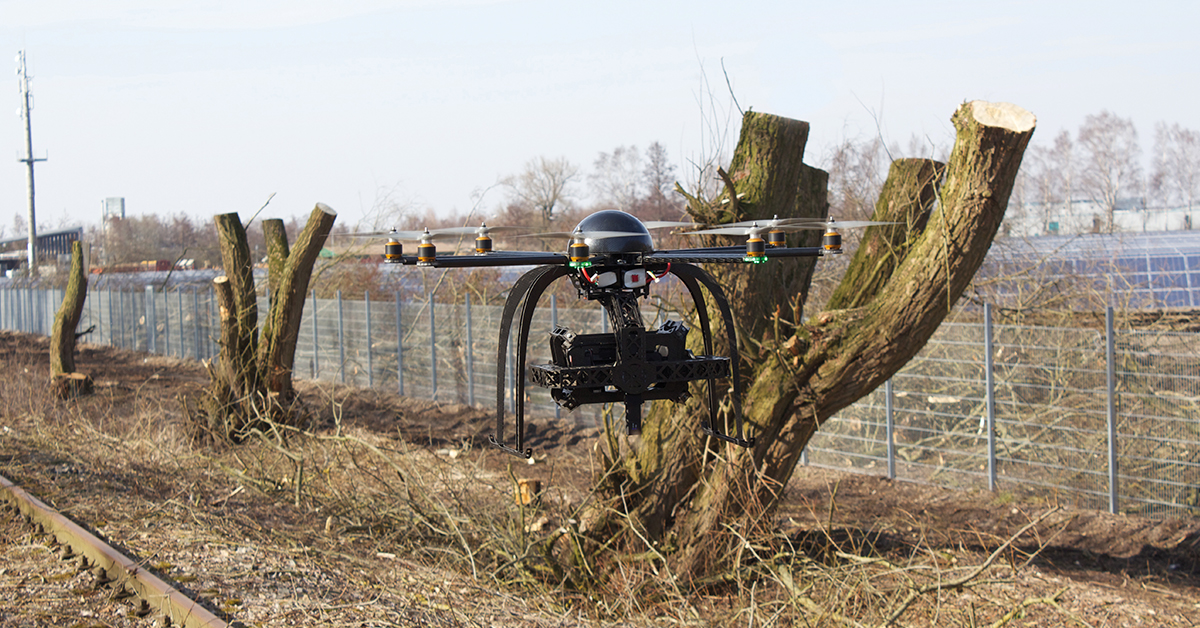 Thermography has become an important topic in the industrial and construction sectors in the past few decades. A new development in this area consists of thermographic inspection from the air. Combined with drones, thermal imaging cameras can be particularly useful for inspecting photovoltaic systems. Thermal imaging camera drones are also being used for the thermographic inspection of inaccessible buildings or electric power lines as well as for firefighting and law enforcement jobs. The technology could also be implemented for other industrial applications, research and development, cutting edge aerial archaeology or nature and animal observance.

Prior to the use of drones, overviews of larger photovoltaic systems could only be thermographically examined from higher locations and buildings using skyworkers or elevated photography tripods, which required extensive effort and was quite inflexible. Beni Riedi of the Swiss firm emitec Messtechnik AG was dissatisfied with this and therefore developed the idea of a thermal imaging camera drone to inspect photovoltaic systems and larger buildings.

Measurement and testing solutions from emitec

From the idea to prototypes

When it came to thermography, Beni Riedi therefore had access to the full range of high-end thermal imaging cameras. “Due to the larger distances, we realized that we had to use a high-end camera with high thermal resolutions", explains Beni Riedi. “The flight solutions had to be just as reliable." He therefore needed a competent partner for the drone, which he found in Helipro GmbH, a specialist in fast uncomplicated aerial recording. “Our drone hovers using electronic motors and has the flight properties of a hummingbird due to its light weight”, explains Marc Baumann from Helipro. “Therefore it is possible achieve aerial recording from new angles and at a height of up to 150 meters."

The drone uses an HD video downlink to send the live thermal image to one or more monitors (e.g. to a monitor for the thermographer and simultaneously to a tablet PC for the person controlling the drone). To achieve this, the overall solution from Emitec and Helipro uses the camera’s HDMI port and its own HD downlink solution to transmit continuous nonradiometric thermal video of the entire flight in HD quality and can include the MSX image if required. He has every reason to be proud: “This doesn’t exist anywhere else in this quality". The overall solution from emitec and Helipro also uses a self-developed solution to control the camera, which includes taking a radiometric thermal image while simultaneously performing visual recording.

Thermography services from the air

The first customer for the thermography drone developed by emitec and Helipro is Rolf Rutzer from Krüger + Co. AG in Switzerland, which using it to position itself as a technological forerunner and extend its service portfolio. Krüger + Co. AG was originally established as a small engineering firm and now has over 250 employees. The manufacturer and service provider specializes in construction heating/drying, water damage, leak detection, building physics and air conditioning among other things. “Using the thermography drone, we can provide our customers with inspection services for large buildings and photovoltaic systems, which were not previously possible”, explains Rolf Rutzer. “The thermography drone provides valuable results with regard to quality assurance, maintenance checks and elementary events. This serves to extend the value chain for the consumer with an important element while increasing ecological and economical sustainability“.

Maintenance should never be neglected

Every medium-sized or large photovoltaic system should be inspected at least once a year. Therefore any possible defective modules can be detected during installation and warranty services can be applied for in time. This could include manufacturing defects or damaged caused during transport. It is also important to ensure the efficiency of the entire system while it is in operation and replace any defective modules. Thus any defects or even damage caused by weather can be quickly remedied. An overview of possible problems can be found in the free FLIR guidebook for construction and renewable energy applications: www.getflir.com/green-guidebook

The drone is very efficient especially if larger areas with many modules have to be inspected. If for example a problem occurs in a solar panel on the roof of a barn, it would require too much effort to measure the modules individually with a meter. Thermography is ideal for this because errors in photovoltaic modules usually have relatively high temperature differences of 10-20°K (=°C).

To achieve inspection from a certain distance, Beni Riedi requires an extremely high-quality thermography camera with a high resolution. Emitec therefore chose the FLIR T640bx. Its high-resolution detector with 640 x 480 pixels not only provides clear images with a high level of detail. The camera also has a permanent continuous autofocus, which is important to achieve a clear video stream of the thermal image, because the drone’s flight altitude is constantly changing. Additional functions include a camera viewfinder, integrated GPS, a compass, live line profiles, sketching on the image (thermal and visual), MPEG4, WLAN, Meterlink, Thermal Fusion, image-in-image and the image enhancement function MSX, which allows for thermal imagery of previously unknown detail by combining the thermal and visual images.

The thermography drone is provided in a full package including the flight device as well as the FLIR T640bx camera. It is not only provided with the 25° standard lens, which itself provides an excellent overview from the air. The included 45° wide-angle lens can be used to achieve an even larger thermal field of view. Once certain problem areas have been identified, the drone can then use the 15° zoom lens to make detailed recordings of problematic spots from high altitudes. The zoom lens is also great for inspecting electrical power lines, because problems here are often within a very small area and the flight device has to maintain a certain distance.

Software and training are included

The overall solution includes the analysis software as well as a 3-day training session. During the first 2 days, Marc Baumann from Helipro explains the drone technology and control in theory and practice so that the user can safely control the flight device, which is an important requirement for insurance coverage of the thermography drone among other things. On the third day, Beni Riedi from emitec explains the camera and software technology to the users, who should be certified or at least have sufficient training as thermography specialist.
Handling and the effect of weather

Of course use of the drone has certain limitations. The system can not be used in the case of snow, rain or strong winds. “By the way, wind is disadvantageous for thermographic building inspections in general", explains Beni Riedi, “because wind cools the facade and thus falsifies the results." In addition to this, it should only be possible to rotate the camera with the drone within a certain range to prevent the thermal imaging camera from being positioned directly facing the sun, which can damage the detector.

Helipro recommends a 6-month service interval to insuring proper functioning of the drone. The FLIR cameras generally require no maintenance. However, Beni Riedi recommends having them checked, recalibrated and their software updated by emitec once a year.

When designing the thermography drone, emphasis was placed on being able to use the camera around the year and as flexibly as possible. It achieves this by way of its modular construction: Although the camera is tightly fasted to the drone for safe use and has to be wired with a unique solution for control and HD video downlink functions, it can be quickly removed and used as a handheld thermography camera. Even the drone’s two primary applications (photovoltaic systems and building thermography) complement each other because photovoltaic systems usually have to be inspected during the hot months, whereas heat loss in the building sector primarily occurs during the cold season. The investment in these thermography drones quickly pays off due to high demand.

With the thermography drones, emitec, FLIR Systems and Helipro provide efficient high-tech inspection technology. Operators of photovoltaic systems and owners of larger buildings can benefit greatly from using these systems by way of specialized service providers. The participating companies have proven their high level of competency in this field and added a groundbreaking service to the market.